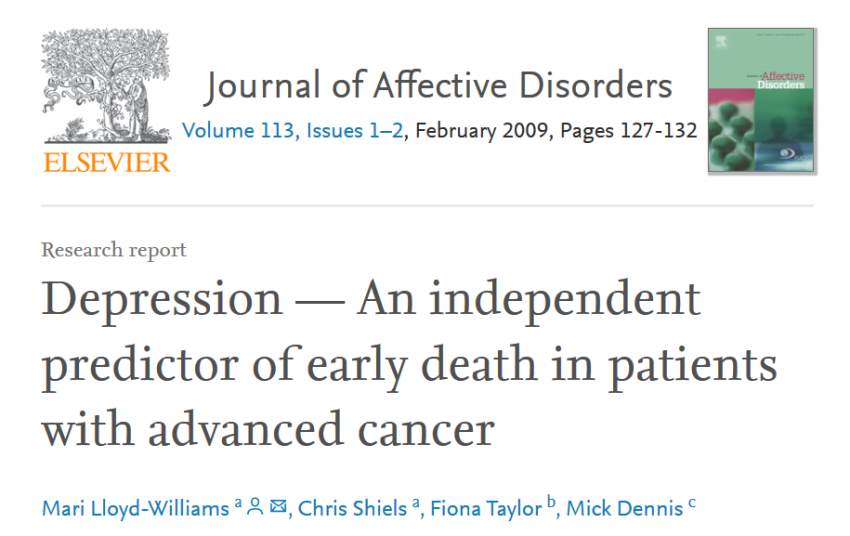 Out of the eligible 132 patients, 87 participated in the study. The Edinburgh Depression Scale (EDS) and self-rated symptoms list were completed three times over an eight-week period and analyzed, together with demographic and clinical factors. Depression was self-rated in 29% (25/87) of patients at the initial screen. 54.5% of surviving patients remained depressed at eight-week follow-up. No significant associations were found between baseline EDS ‘caseness’ and demographic factors or tumour type. Sixty-two per cent (54/87) of patients died during the 12 month period of the study. The EDS score had a significant independent effect upon risk of death in study period – a one-point increase in EDS score raises risk of outcome (death) by 7%.

You can find out more about which cookies we are using or switch them off in settings.

This website uses cookies so that we can provide you with the best user experience possible. Cookie information is stored in your browser and performs functions such as recognising you when you return to our website and helping our team to understand which sections of the website you find most interesting and useful.

Strictly Necessary Cookie should be enabled at all times so that we can save your preferences for cookie settings.

If you disable this cookie, we will not be able to save your preferences. This means that every time you visit this website you will need to enable or disable cookies again.