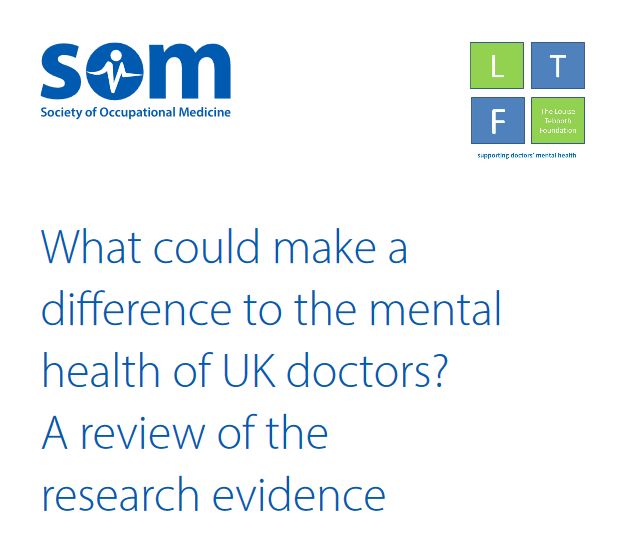 A review published in September 2018 by the Society of Occupational Medicine and The Louise Tebboth Foundation. [1]

A substantial proportion of UK doctors experience mental health problems, manifested as burnout, work-related stress and symptoms of psychiatric morbidity. The prevalence varies, however, between studies and different medical specialisations. Where comparisons have been made, the risk appears to be higher than that of the general population. Doctors working in particular specialisations, such as GPs and junior doctors, appear to be at greater risk of burnout, work-related stress and general mental health problems. There is evidence that doctors, particularly female doctors and GPs, are at greater risk of suicide ideation and actual suicide than the general population and other occupational groups. Nonetheless, more recent data is required to confirm the validity of these findings under current conditions. The stigma of disclosing work-related stress and mental health problems as well as fears about confidentiality are likely to lead to under-reporting among doctors. Little is known about positive wellbeing amongst doctors, but there is some evidence that they are generally resilient and optimistic despite experiencing comparatively high levels of work-related stress, burnout and other mental health problems. The healthy worker effect should be noted, where doctors who have serious health problems and who are less able to cope with the demands of the job will have left the profession.

1            Kinman G, Teoh K. What could make a difference to the mental health of UK doctors? A review of the research evidence. Society of Occupational Medicine and The Louise Tebboth Foundation 2018.

You can find out more about which cookies we are using or switch them off in settings.

This website uses cookies so that we can provide you with the best user experience possible. Cookie information is stored in your browser and performs functions such as recognising you when you return to our website and helping our team to understand which sections of the website you find most interesting and useful.

Strictly Necessary Cookie should be enabled at all times so that we can save your preferences for cookie settings.

If you disable this cookie, we will not be able to save your preferences. This means that every time you visit this website you will need to enable or disable cookies again.